I.  Introduction and Historical Literature Review
The international country’s continental football history officially began at the 1916 South American Championship football tournament although all participants are only 4. The first international tournament ever in Europe is the 1883 British Home Championship. However, most of continental tournaments established in the late 1950s (AFC Asian Cup in 1956, African Cup of Nation in 1957 and European Nations Cup in 1960).
The World Football Elo rating[1] is a ranking system to calculate national team performance based on every official matches played, invented by Alpad Elo and implemented in 1872, with a formula that includes various football competition parameters are marginal victory coefficient, level between competitors, importance of matches and finally concludes the ranking of nations by month. The FIFA World ranking system[2] was followed in 1992 with a similar factors of formula to Elo Rating. However, these two systems allows the performance in friendly matches to take advantage although the game is just an uncompetitive trial playing and the game result is meaningless in historical status. Also, the determination between competitors level from previous result could be highly erroneous when the fluctuation of team performance is commonly existed within a single tournament.  Importantly, there has been none of all-time national teams ranking works established to date.
Accordingly, this work’s objective is to study, integrally regulate and standardize the system of the entire international country history for the evaluation, including all performance characteristics (win-draw-lose, goal difference, place, round and trophy) against the determined standard of competitions within the designed system of methodology conformed to the existed format or condition at any point of evaluation.

1.1) Determine the winner of each major international tournament by qualitative analysis.
1.2) Determine the competitive level by counting goal difference to calculate its average for each round and input by the following formula ;
(∑ Goal Difference Average/(Number of Round x 4.5))
(Number of Round +((5-Number of round)/2))/5
The standard of competition (STD) = Top Level X Competitive Level X CC
CC = Competition Coefficient (World Cup = 1.2, Continental Cup = 1.1)
1.3) The Status Performance (STS) = SQRT(FRC x STD)
Finished Round Coefficient (FRC) = TLSC – (1-GS)  ; (Winner = 1, Runner-Up = 2, SF = 3, QF = 4, R16 = 5, R32 = 6)
TLSC (Top Level Standard Coefficient) : World Cup =5, Euro/Copa Americas = 4.5, African Cup of Nation = 3.5, AFC Asian Cup = 3.2
GS (Gap Standard) = 0.85 (AFC Asian Cup), 0.8 (World Cup, African Cup of Nation), 0.78 (Europe, Americas). These value is from comparative experiment of average performance between World Cup and Continental Cup.
1.4) The Raw Direct Performance (RDRT) is calculated by chain of beaten from top level to the evaluated team.
For elimination format, being beaten 1 goal is equal to – 0.35.
For league format, the difference will be calculated based on following formula ; ∑ ((DGD/N)*0.35)/Nq if number of team > 3
∑ ((DGD*0.75/N)*0.3)/Nq if number of team = 3
DGD : The descending goal difference
N : The number of matches
Nq : The number of qualified teams in the group
1.5) The total performance (TP) = SQRT(STS X RDRT)
*Remark : FIFA Confederation Cup is not considered.
2) Qualification
2.1) Determine top level in each group : the furthered best performer in major international tournament within a qualification group is set as the top level value in that group.
2.2) In the pre-1960s, the performance in zonal competition are Central European International Cup, British Home Championship, Balkan Cup, Nordic Cup and Central American Cup could either replace the disappearance of any qualification tournament or combined with existed qualification performance by average if the zonal performance is higher.
2.3) For the continental tournament without qualifying competition or not participate in qualifying round as a host or a provider, the performance in major tournament overs qualifying performance automatically.
2.4) Calculate the raw direct performance in the same procedure as clause 1.5
3) Final Calculation
The obtained tournament performance partition (OPP) =∑ TP x PRT
; PRT = Periodical Ratio between Periodical Coefficients (4 years = 2, 3 years = 1.5, 2 years = 1. 1 year = 0.5)
OPP will be matched to multiply with proportional weight whose number is an average of available tournaments between continents.
Each sum of competitions’ performance are aggregated as a basic total score.
The trophy bonus is given for only the winner in World tournament and designed as following ; World Cup since 1954 and 1934 : 3 point, 1930/1950 World Cup :2 point, 1920/1924 Olympic Games : 1 point, 1928 Olympic Games : 0.5 Point
Continental : Europe : 2 points, Copa Americas : 2 Points (for 4 years partition)
African Cup of Nations : 1 point, AFC Asian Cup : 1 point
4) The Decisive Factors
0.1 % is required as a minimum value to unanimously decide the rank. If not, consider the aggregate peak value at 0.05 is a minimum value to significantly differentiate, if not, consider second peak partition or even more until match the rule.
III. Implementation
The implementation is conducted by continent and selected based on the historical record of round performance. In European zone, all qualified 26 nations are implemented. For other continents, 23 African nations, 21 American nations and all 20 Asian & Oceania nations are implemented. 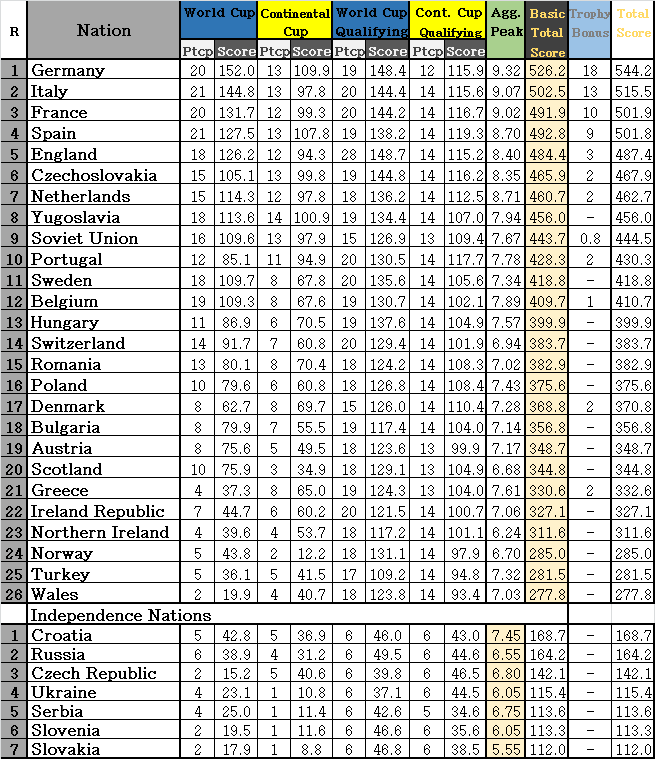 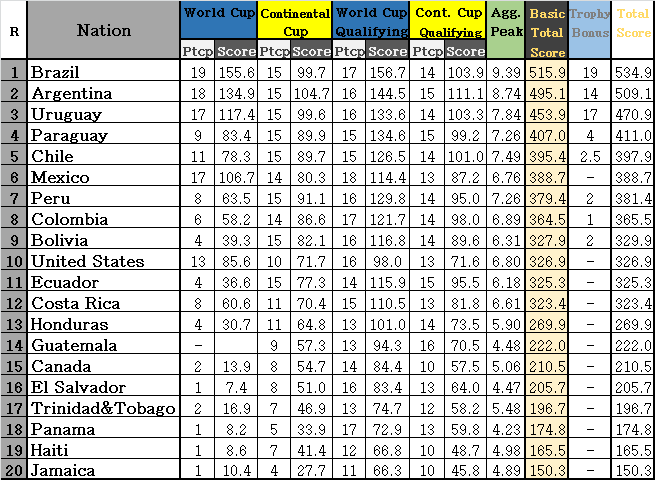 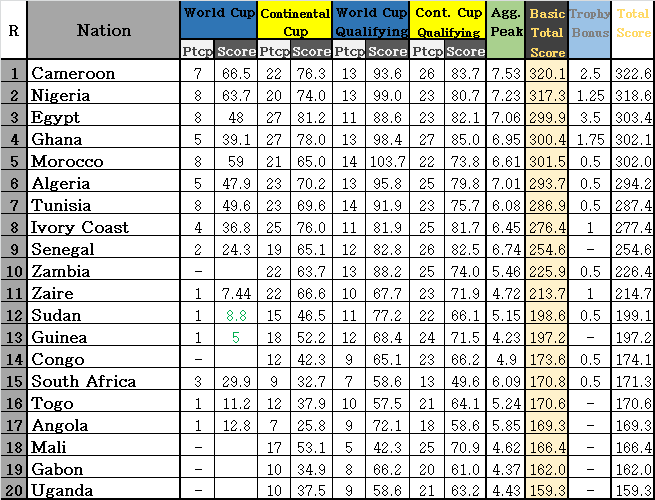 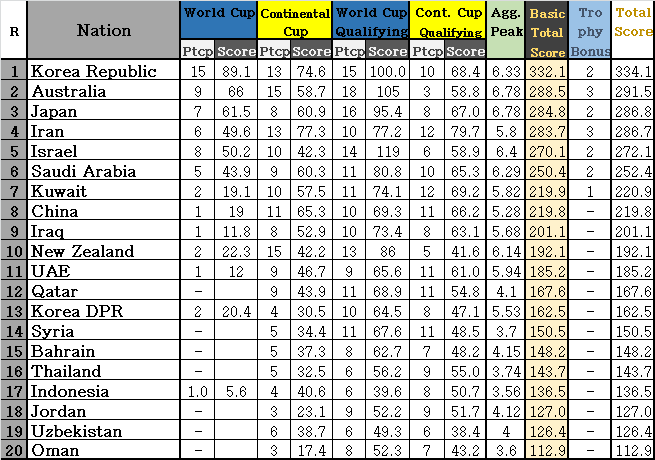 The methodological implementation allows the rankings to have represented the countries’ entire performances against the determined standard and greatness throughout the history. However, the qualitative analysis to determine top level performance of the winner between tournaments and eras are provided by author’s cumulative tacit knowledge converted to mathematics that is always controversial but the scale of tolerance is however quite narrowed, possibly effecting on the change of rankings in a minor scale. Additionally, the proportional criteria between parts of evaluation and the proportional weight given to highest to lowest performance has a main role to finalize the ranking.
The partition weight applied to the tournament rating reduces the disadvantage of the teams that participated in lower tournaments than average group in case of achieving a competitive high peak and the teams participated in more seasons than average group is just advantageous as they had more opportunities but the number of calculated tournaments is still limited in average value.
In Europe, Germany has become the number one as expected and left the very high gap to the second place Italy. Spain’s greatness in the most recent era ranked them up to the third place ahead of France. Czechoslovakia surprisingly beat Holland thanks to its consistency. In the peak years, Holland performed in a much higher level. However, Holland in the pre-1970s can be classified as a below-average team in Europe and even did not enter to World Cup qualifying rounds 2 times and the same status in the additional period between 2016 to date. Soviet Union first participated in international major tournament very late in 1958 and inevitably impacts in its longevity. Although Scotland was known as one of the best team in Europe during the 1920s, the nation participated in only British home championship and only Olympic Games is applied into the system for that period. For the former union likes Soviet Union, Yugoslavia and Czechoslovakia, the best performance between related independent nations is applied to those unions. Note that Croatia is the best performer among the independence nations that separated from the unions.
In Americas, Brazil, Argentina and Uruguay is unsurpassable in its place. South American nations dominate the ranking as 8 of them appeared in top 10 and Mexico is the best team outside this zone finished at 6th. USA and Canada’s football disappeared in CONCACAF championship for around two decades that is largely impacted on the ranking. Jamaica is also impacted from the same reason, not enter to four continental qualifying rounds. Costa Rica finished as the best Central American nation as approximated. There are only two nations in the ranking never participated in World Cup are Guatemala and Panama. Cuba is disqualified for the list.
In Africa, the top places are very competitive and finally Cameroon finished the first place. It is noticeable that 3 North African teams are Egypt. Algeria and Morocco is way equal in total basic score and Egypt became the best of them by trophy bonus from African cup of nations. Although South Africa was one of top African teams in the modern era, the nation just first international football in 1990s and so far to achieve the top group in the ranking. The implementation results saw the disqualification of 3 teams in order are Libya, Ethiopia and Burkina Faso.
In Asia & Oceania, Korea Republic is the best nation in this zone while Israel and Australia had a potential to get the number one place but the confliction to the Middle East nations essentially conduct Israel to European zone and prevent them to qualify for a prolific major tournaments while there is no zonal competition for Australia until the inaugural OFC nations cup in 1996. Japan increasingly developed themselves since 1990s in contrary to the pre-1990s that the nation was just an average team in Asia. Uzbekistan, who is an independent nation from Soviet Union, a leading Asian team in the modern era, is ascending the ranking chronologically.